Prison inmates use tattoos as a way of communicating everything from affiliation with white supremacists and Nazis to the length of their incarceration or type of crime they’ve committed.

For some, receiving these tattoos is a personal choice and point of pride. There are also some who are forced and are branded with a tattoo to send a message.

Not all tattoos found on the bodies of inmates come from their time in jail, as several inmates enter lock up with pre-existing art. As each convict begins their sentence, corrections officers are tasked with recording distinct markings, such as tattoos, to identify the inmates.

Which tattoos are the most common across the cellblocks? Is there a favorite region of the body for an inmate to have their tattoos placed? We reviewed data from the Florida Department of Corrections to understand the prevalence and placement of body art across Florida’s prison population. Read on to see the story of inmate ink.

The Art of Suffering 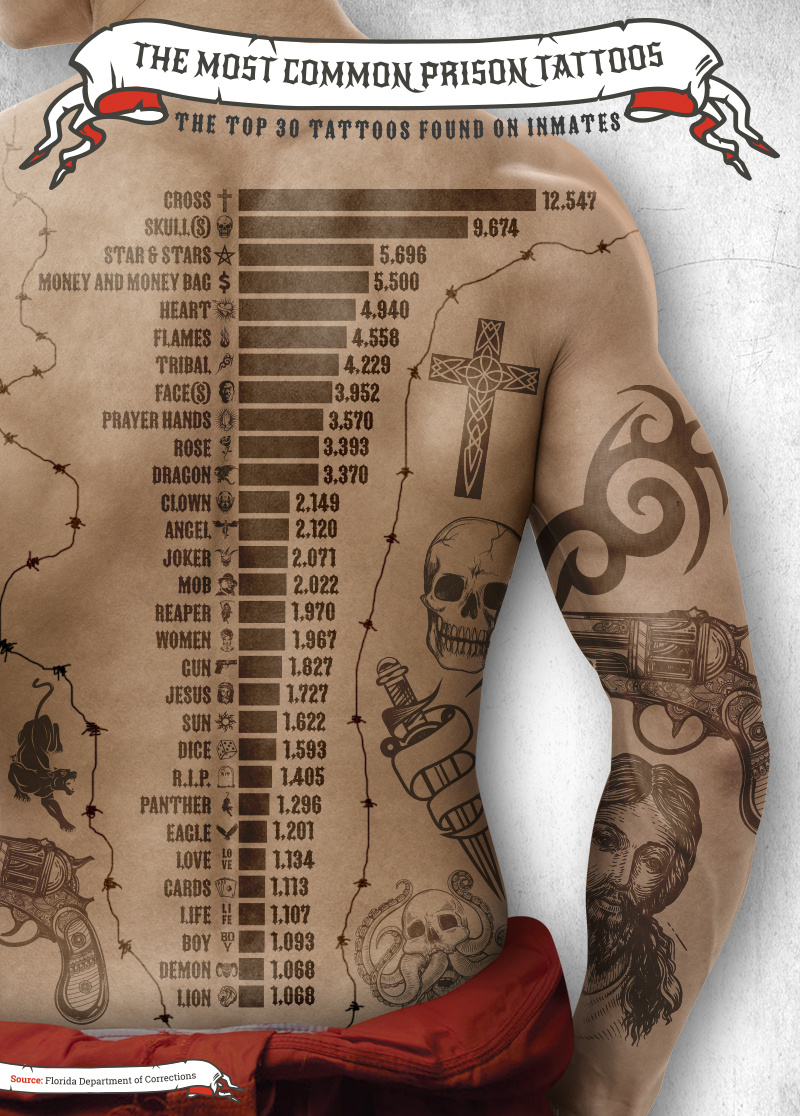 With over 12,500 instances of prison tattoos being the cross, it is more common than any other tattoo for prison inmates. This could be because over 75 percent of Americans are affiliated with a Christian religion, meaning the tattoo could reflect a feeling of remorse for their actions or a statement of their beliefs. It may also be a cry for redemption.

Tattooed on fewer inmates but still very popular are skulls. There are over 9,600 instances of skulls located on inmates’ bodies. No other tattoos come close to either the cross or skulls – the next closest sets have just over 5,500 instances: stars- and money-themed tattoos.

Scene of the Crime 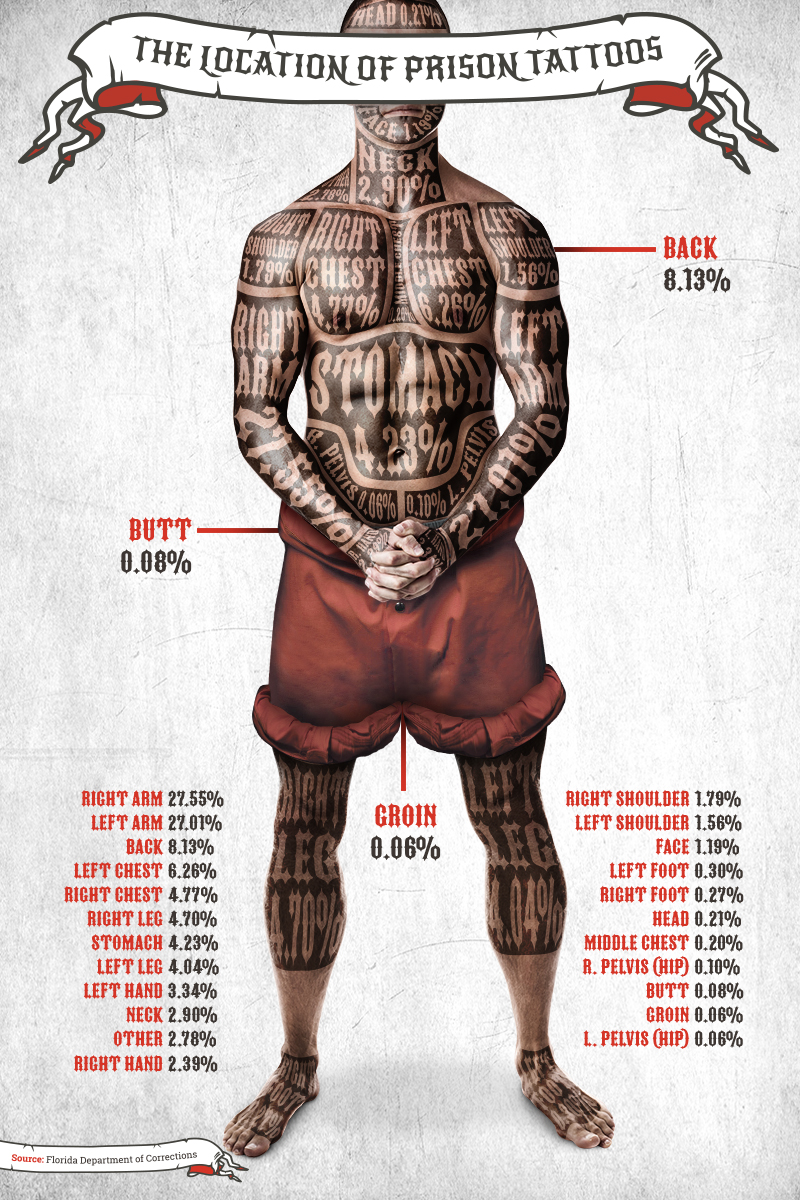 While Hollywood – through film and television – may weave tales of inmates who are more of a tattoo tapestry than an inmate with some ink, the truth is most tattoos are isolated to two key areas – the right and left arms. Close to 55 percent of the tattoos examined were located on either the left or right arm. These popular areas were essentially tied, with fewer than 1 percent separating the two.

Other popular areas included the back and chest. Eight percent of all tattoos were inked on inmates’ backs, and over 10 percent were on chests – broken down to more than 6 percent on the left, and close to 5 percent on the right side.

Some of the least popular locations included the face, with just over 1 percent of tattoos found near the eyes, ears, mouth, or nose. 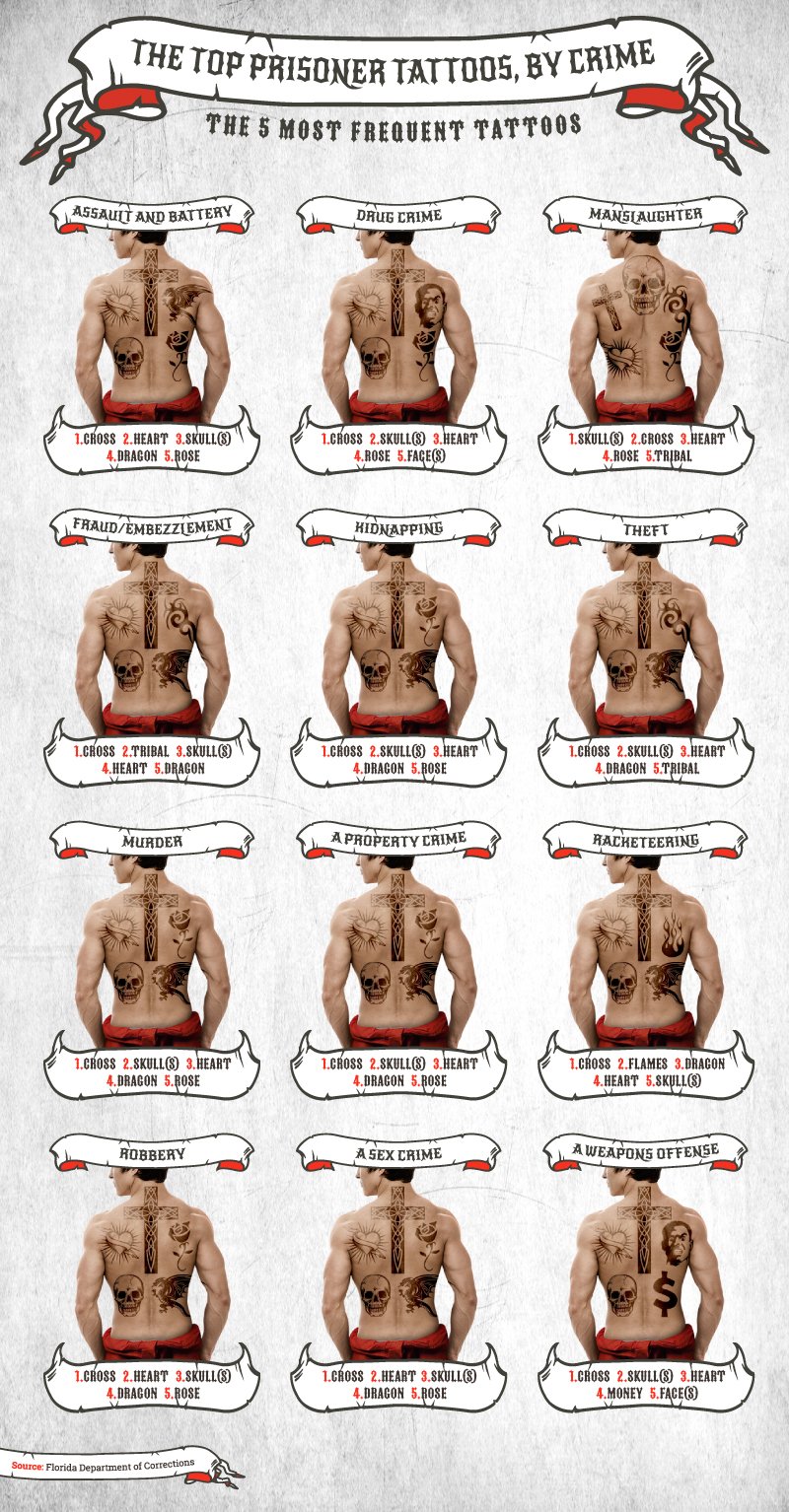 Outside of manslaughter – where the most frequent tattoo for those jailed for this crime was a skull – every other crime featured the cross as the most prevalent tattoo. Given its overall popularity within the prisoner population, this isn’t too much of a surprise. Nine crimes – assault and battery, fraud or embezzlement, kidnapping, theft, murder, property crimes, racketeering, robbery, and sex-related crimes – featured a dragon in their top five most frequent tattoos.

Use our flipbook to switch between the different crimes committed. From assault and battery to kidnapping and manslaughter, you’re able to see the frequency of the top 30 tattoos on inmates charged with these particular crimes. For example, manslaughter and forgery and counterfeiting are the only crimes in which skulls were more popular than crosses.

Which tattoos are shared by inmates committing common crimes? This graphic shows the top sentences being served by individuals with certain tattoos. Across 17 of the 18 examined, the most popular sentence for each tattoo is theft. Only the “1%” tattoo is affiliated with a different first place sentence – assault and battery. 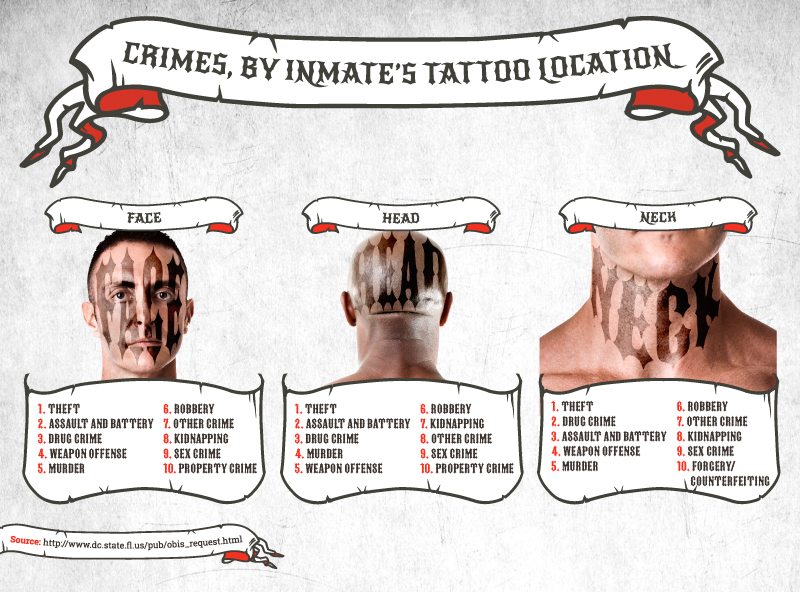 Tattoos on the neck (under 3 percent), face (just over 1 percent), and head (fewer than 1 percent) are some of the least common, but some inmates do carry permanent marks on these body parts. Across all three areas, theft is the No. 1 crime perpetrated by these convicts. Although the second and third most committed crimes may have differed in placement, assault and battery and drug-related crimes rounded out the top three for each. 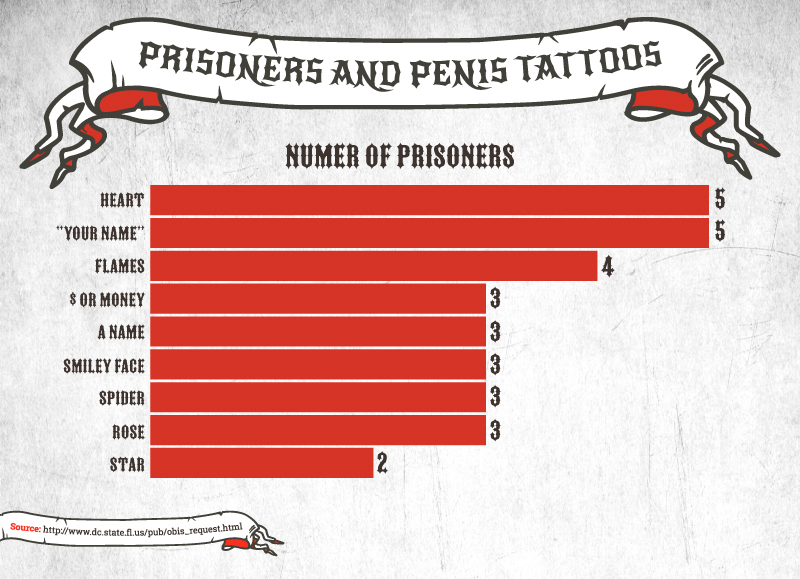 The crimes committed by these inmates with heart tattoos on their penises ranged from carjacking to theft of Copper or other nonferrous metals. Those with “Your Name” inked on their appendage were incarcerated for crimes such as robbery with a gun or deadly weapon, felony battery, and burglary. 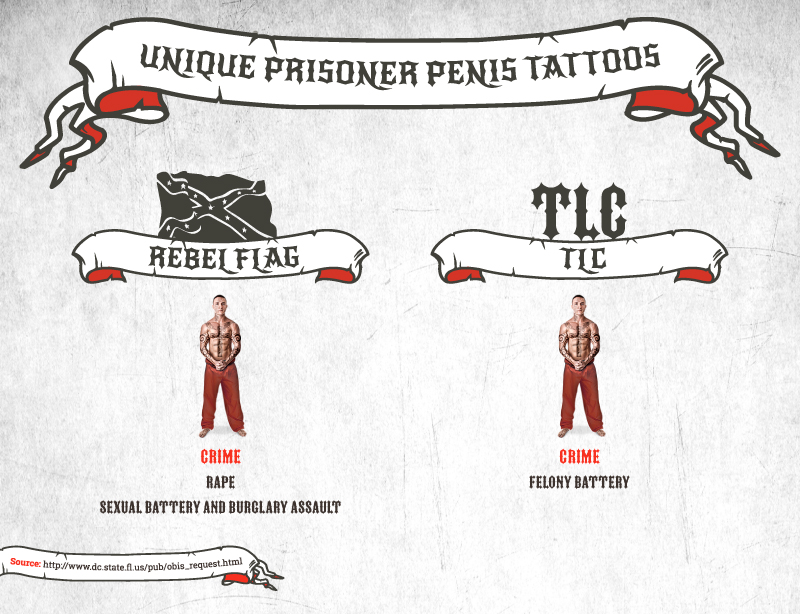 Two other penis tattoos were the Rebel flag – famous for being used by the Confederate Army during the Civil War – and the letters “TLC.” In the case of prisoners sporting the ode to the South down south, rape, sexual battery, and burglary assault were the most committed crimes. The individual with a cry for “TLC” ended up in the slammer for felony battery. These are both, however, types of tattoos infrequently seen on the inmate population.

Ink to 20, Option for Parole

Inmates and tattoos go hand in hand, but you’ll usually find them on the left and right arms of most prisoners. You also shouldn’t be surprised if their tattoo is a cross or skull – these are two of the most common tattoos among inmates. These are all individuals who have committed varying levels of offenses deemed unlawful and sentenced appropriately.

We tapped into the Florida Department of Corrections database for inmate tattoo records. The information, which is entered into the system by corrections officers and staff, contains text explanations of tattoos in a variety of fashions: misspellings, slang terms, subjective descriptions of images as well as crimes and tattoo locations. Therefore, sums, counts, and rankings of tattoos may have minor discrepancies and are educated estimates made by a team of programmers and data scientists. In addition, the Department of Corrections lists its own disclaimers regarding the data.

Just as the ink on an inmate’s body can mean many different things, the ink on this page is designed to be shared for noncommercial purposes. The content on this page was produced by the research team at InHomeSafetyGuide.org. If you do decide to share it with your readers, please make sure your work links back to this page and its contents.