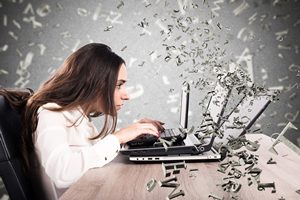 Identity theft is a nightmare. If you’ve ever been through it, you know exactly what I’m talking about. Especially if you’ve woken up in the morning to discover your bank account has been drained, or you get a bill in the mail for a car you never purchased. And it doesn’t end there. Credit card fraud is the most common type of identity theft. Your tax refund can even be stolen.

Because identity theft is so dreaded, you’re probably doing everything you can to prevent the problem from occurring in the first place. But are you really?

If you have a social media account of any kind, your identity could be easy pickins for even the dumbest criminals. Before your feathers get too ruffled, I’m not saying you have to delete all of your accounts and disappear into the mountains with a bag of cash in order to avoid identity theft. But, you’ll likely have to change your approach to socializing online.

Let me tell you what I mean.

Make your profile as private as possible

You may like the idea of putting yourself out there like your favorite celebrity, but it’s not a good idea. You’re just asking for trouble. Keep your information as private as possible by choosing the highest privacy settings that you can.

On Facebook, that means only allowing existing friends to see the details of your profile. Simple enough, right?

Wrong! Can your friends share something you’ve posted? If so, they have friends that you don’t have, and they may not have the same privacy settings you do. You have to get into the details of your settings.

Learn more about Facebook and its privacy settings here. Then, make sure you take a look at the other tips on this list. Your privacy settings aren’t foolproof, so doubling back is vital when it comes to keeping your identity as your own.

We’ve talked about this one briefly before, but it’s worth revisiting again. Just because someone adds you as a friend on social media doesn’t mean you have to confirm the friendship.

Did you know there are approximately 170 million fake profiles on Facebook? They’re completely made up. These profiles are even bought and sold. Some of these profiles are more harmless than others. Many of them are used as a way for small businesses to get more likes, but some of them are made by people who are fishing for information. Don’t friend someone you don’t know. It’s as simple as that.

Some of these people are way too smart for their own good, though. They may comb through your existing friends list, and take a look at who their friends are, to create a profile with a name that’s familiar to you. If there’s any doubt, simply send that person a message before you friend them. You’ll be able to tell pretty quickly if they are who they say they are.

You’ll inevitably have to share some of your personal information on social media. You’ll probably be asked to list your birthday and where you live. Does that mean you have to post your exact address? Or you have to give a play-by-play of the sites you visit while you’re on vacation? Hell no!

It’s amazing what kind of personal information people are willing to share online, and it’ll probably surprise you to learn how that information is used. A thief could simply snag your picture and use it as their own. They could pose as you online in an attempt to ruin your reputation. And of course, they could do identity theft the old-fashioned way and use your persona for financial means, like what happened to Victoria in London.

If you’d feel uncomfortable throwing a letter away in the mail that contains your address, email address, and phone number without shredding it, why would you put it online? The less information you can share about yourself online, the better.

Remember that social media sites are not self-contained

Don’t fall into the trap of feeling like Facebook, Twitter, and other social media sites are online communities that are floating islands. They’re not. They’re located in the larger city of the internet, which means whatever you post on social media will be on the internet forever, and it could end up on other areas of the web. After all, although it’s true that Facebook doesn’t own your photos once you post them, they do have a little wiggle room to use your images if they feel like it. Imagine what someone else could do with your full name, address, and birthdate.

It almost makes you want to delete all of your social media profiles. Almost.